A bewitching history and future travel stop in Salem

After taking a history course in college, Witches, heretics and religion, my interest was piqued for a trip to Salem. Although it was a short period of time, the Salem witch trials caused such a stir that it has created a tourist destination and something the world still talks about and studies nearly 400 years later. 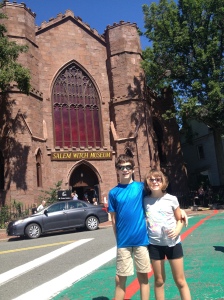 On a recent vacation to Massachusetts, we had a day trip to Salem, which started with the Salem Witch Museum. A bit hokey for the cultured tourist, this exhibit takes you through lighted displays and storytelling to give you a sense of what happened in the 1600s in Salem. It was presented clearly so my kids were able to get the full picture without asking a million questions.

After the show portion, we were taken into a second area where we were walked through the history of witchcraft, from pagans to witch stereotypes to the Wiccan religion.

After the museum, we walked through Salem, which also is famous for being the home of the Parker Brothers, creators of Monopoly and many other board games. The Salem Museum, which is free, is a small museum that has displays about the witch trials, a town fire in the 1800s and a special exhibit on Monopoly. 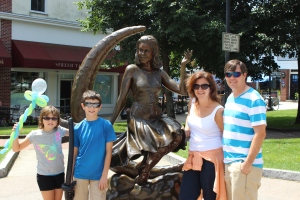 We also walked through the cemetery, which has gravesites that are several hundred years old, as well as an area dedicated to the victims of the witch trials. We stopped at a statue of Samantha from Bewitched, which was filmed in Salem.

After investigating the witch hysteria, we walked to the water and the pier and had a great lunch with lobster rolls and clam chowder. We walked through a few shops, which were bustling with tourists. The city itself is much more than its witch history and is a great place to stroll, eat and shop.

Disclosure: Family trip, no compensation received. These opinions are my own.