Bringing an old deck back to life

My husband and I have argued about our deck for years. The original owner of the house built it himself. It’s one of the things that made us fall in love with the house – a multilevel deck, brick paver patio and partially surrounded an above ground pool.

We should’ve heard warning bells when the owner had it inspected before we moved in and had to rebuild the steps because they weren’t spaced properly. A few years later, we found that he didn’t anchor the posts properly, either, and the deck started to shift with the freeze/thaw cycle. A couple of times, we had handymen in to cut and repair the posts to make the deck level again. It’s currently a bit uneven and sloping towards the pool.

Before giving up and taking a chainsaw to the whole thing, I set out this summer to stain it to see if it was still tolerable. My husband, who travels a lot and took the first staining job several years ago, thought I was crazy and wanted no part of it.

After I bought a couple of gallons of stain, I saw a commercial on TV for Behr’s DeckOver. The commercial reeled me in, and I returned the stain and came home with the DeckOver. The advertising says the thick paint/stain would bring new life to an old deck, help seal up smaller cracks and give the deck a slip-resistant finish. When I was having my color added to the base, the guy at the store told me that the paint also would reduce the heat of the deck by a bit.

I started with the upper portion of the deck because it is the smallest and it’s the part that we look at the most, right off of the kitchen. I used a power washer to clean the deck and take some of the current stain off, although there wasn’t much left of it.

Twelve gallons later, we have most of the deck covered, with two coats on the walking parts (the instructions recommend two coats on all but we’re lazy like that and the railings took forever). I’ve been taking the job slowly, doing parts here and there on evenings and free weekends. My husband joined in a few times when he was in town, and the kids tried a few swipes of the paintbrush before getting bored and heading off to other pursuits. 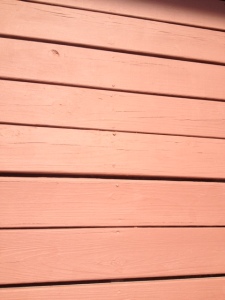 We still have some of the bottom portions to do, along with the lattice that surrounds the deck to hide the underside. I’m considering investing in a paint sprayer for the lattice after having painted a few smaller pieces that make up our deck gates.

Ideally, I’d rather have a stain to have the wood grain show through. However, in the shape that our deck is in, this product is ideal to seal up some of the cracks and provide a surface that is perfect to surround our pool. The slip-resistant finish is so much better than slippery wood and has reduced slip and falls from our kids and their friends. I’ve recommended it to my mother and some neighbors who need to paint their front porch decking and steps. The finish, which feels almost like a fine grit sandpaper, is great for stairs, especially in a wet Michigan summer or icy Michigan winter.

If you’re looking to revive a deck or have a deck or stairs area that has heavy traffic, I highly recommend Behr’s new product. We’re falling in love with our deck again just in time to enjoy it during the summer.

Disclosure: This is not a sponsored post and I was not compensated in any way. This is my personal opinion of Behr DeckOver.