When your son, who has been practicing indoor baseball for the past four months, says he’d rather skip his first scrimmage because he still wants to explore, you know you’ve hit on a good thing.

I had never been to the Michigan Science Center before last weekend. Sure, I had heard of it when it was the Detroit Science Center but never made it there. I wasn’t quite sure what was there, if it was worth it and what the age ranges were.

I was missing out.

My son and I spent five hours at the Michigan Science Center on a recent Saturday, were still having fun and did not see everything that we wanted to see. Had my daughter not had a gymnastics class, I’m sure it would have been even harder to get them to leave.

When I hear “science center,” I think of science experiments and complicated processes that make my head spin. In reality, the science center makes learning fun. I’m not sure who was having a better time when we went into the “jamming room” and played the guitar and drums.

Of course, one of our favorites was the electric show – the classic show where you see someone put their hair on end. We had a great time learning about electrical currents and how our bodies react by touching and impacting the currents.

Unfortunately, we ended up missing the planetarium but we did see the IMAX show of tornado alley. My son walked in and said “where’s the screen?” I told him “the whole thing (dome) is the screen.” Whoa, blew his mind!

We had a nice break in the middle of our visit for lunch at the Cosmic Café, which had a good selection and was affordable.

Overall, we had a fantastic day and are already looking to go back again.

Discount Offer: Use code TweetTeam for the Michigan Science Center @mi_sci through April 5 and get $3 off adult/$2 off child admission. Not valid with any other offer. Limit 6.

Disclosure: We attended the Michigan Science Center as part of the TweetTeam. This post was not expected nor is part of the event for attending and is solely my opinion.

What every hotel should have

I stayed at a hotel recently that didn’t have an alarm clock or a coffee maker in the room. Apparently, they don’t cater to business travelers and/or wanted people to sleep in. As I traveled on several trips to a few states in less than a month, I began to make a mental list of things that every hotel should have.

A plug near the bed. For your phone. Especially if you don’t offer an alarm clock.

A refrigerator. It doesn’t take up that much space. I was recently at a hotel that had a “cooling unit” with a sign that said it would only cool to around 55 degrees and was not to be considered a refrigerator. Why? Why go through that bother? Just put in a fridge and make everyone happy.

A hair dryer. Standard, yet so many have been through the ringer.

A magnifying mirror. I found that I like hotels that have this now that I’m getting a little older. Although, sometimes the results can be more than you bargained for.

Ample coffee. One caffeinated and one decaffeinated is usually standard. If you offer a one-cup experience, give us a little more, please.

A safe that can fit a laptop. Safes come in so many shapes and sizes, and if it can’t fit my laptop, it’s not very useful to me.

A thermostat that allows you to turn on a fan. When you’re in a room with three other humans (including the little humans), being able to turn on the fan at night can make everyone sleep a little more soundly by having some white noise. Especially when those loud people coming crashing through the hallway after hitting the bar.

Room-darkening curtains . The ocean view is nice, but not for my little humans who are still adjusting to a new time zone. We recently had a hotel that had sliding wooden louvered doors to cover the sliding glass door. Pretty, but it sure didn’t keep out any light.

So what did I leave off the list? What else should a hotel have?

It’s a go with the Go Oahu card

If you’re headed to Oahu with kids, the Go Oahu card is a pretty safe bet. You’ll probably want to hit the major tourist attractions, and this card covers almost all of them. From museums and scenic spots to snorkeling and sailing, the card covers just about every option. 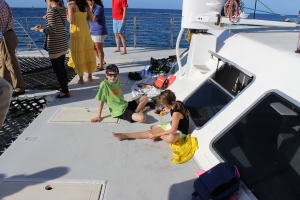 My favorite activity from the card was the Makani Catamaran sail. We chose a morning sail and had no problem finding the catamaran. The crew had their system down and it was a fabulous morning of sailing. We had donuts and fresh fruit, drinks and plenty of warm Hawaiian breezes. I was more than happy to just be out on the water, sunning myself on the netted area, but we were also treated to sea turtles, flying fish and in the distance, a whale blowing a friendly spout of a salute. 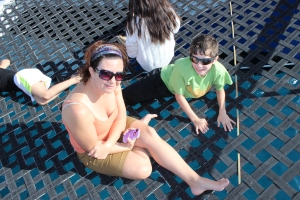 We did attempt to do a kayak and snorkel trip but once we arrived at the location, we were told that they had just discontinued their alliance with the card. Sadly, we were there at the beginning of the year so we were caught in the changeover. Looking at the site now, it looks like they’ve replaced it with a new activity. My advice? Always call first to avoid disappointment later.

We learned our lesson and called ahead for the Hanauma Bay Snorkel. Unfortunately, they were already sold out for the day that we could attend. From others we met on the island, we were told repeatedly that it was a great place to go for snorkeling, and great for kids because of the calmer waters.

Another place we experienced was Wet ‘N Wild Hawaii, Oahu’s waterpark. It was the off-season so a few of the rides traded off at different times of the day, but we had fun trying to surf, battling the waves in the wave pool and getting adventurous on the water slides.

If we had more time, we would’ve definitely taken advantage of more activities. As an investment, the Go Card gives you a lot of great options.

Disclosure: My family received Go Oahu cards as part of my husband’s work trip. This review is my own opinion and was not a requirement of using the cards.

On a recent trip to Oahu, our family had Go Oahu cards, which offer access to many attractions across the island. We decided to try Sea Life Park as one of our options. 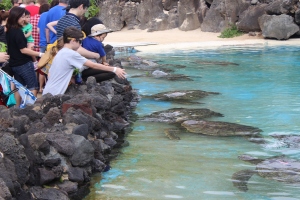 Although it can be fun to look at fish and sharks in an aquarium, Sea Life Park offers much, much more. We had a fun afternoon there taking in the sites and activities. Sure, they have sharks in tanks, and even that was a great experience for my kids because we were able to see a diver going in the tank.

But, we were also able to buy some lettuce and feed the sea turtles, touch starfish and other sea creatures and see a dolphin show. My kids absolutely loved the giant turtles, swimming around and actively going after their lunch.

We were too late to feed the sea lions but watched others give it a go, much the sea lions’ delight. There was even a play area for when the kids needed to blow off a little steam.

The view doesn’t hurt, either. Nestled between the mountains and the ocean, it’s just a great location to get out, walk around and experience the ocean life that Hawaii has to offer.

So if you’re in Hawaii and want to get out for a nice, scenic drive and meet some creatures from the deep, Sea Life Park is a great way to go.