A short sightseeing trip to Paris from London

While we were planning our 10-day trip to London, I kept reading TripAdvisor message boards and other blogs to determine if we should head to Paris for a day or two. Some say it’s not worth it for that short of time because you can’t do it justice and others say it’s easy enough to go back and forth between the two countries.

Because I didn’t know if or when I would ever have the chance to go to Paris again, we decided to go for it. The Eurostar ticket was the same price whether we came back the same day or the next day, so we opted for an overnight stay, giving us about 36 hours in the city of lights.

Most of the recommendations I read said to stay in the lower number aridonnsements but they were also more expensive. We ended up near the Sacre Coeur (Sacred Heart) at the Hotel Avenir not far from where the Eurostar stops. During the day, it had the hustle and bustle of Paris but in the evening, we never had a problem getting into a local restaurant and enjoyed the slow pace when compared to the sightseeing adventures of the day.

Apologies to the French who may have heard by 9-year-old yelling from the balcony “Bonjour, bon apetit” – her only French vocabulary. (Can you image someone yelling from a hotel in the U.S. “Hello, eat well!”)

Playing catch at the Eiffel Tower.

After learning the London Underground, we decided we could tackle the Paris metro. I had pre-booked a behind-the-scenes tour of Eiffel Tower in order to avoid the long lines and it was well worth it. When we arrived, we saw lines everywhere. Our tour took us a few yards away from the tower, down into the basement where we learned about the inner workings. We then took the short group line to the elevator to the second floor. With one child afraid of heights, we decided not to venture to the top floor, and the second floor views were spectacular enough. As part of our tour, we were able to go up on top of the second-floor restaurant for our own private views. The tour guide let my daughter unlock the gate (you just opened the Eiffel Tower!) 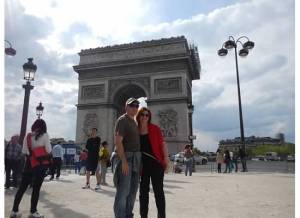 After the tower, we took the metro stop near the Arc du Triomphe and walked down the Champs Elysee, which boasted crowds similar to Disney World.

The next day, I was determined to see the catacombs, so we took the Metro there and waited in line more than two hours. It was worth it to see such a stunning display of history and learn about the past and how it came into existence. My husband and I took turns in line while the other would throw a tennis ball with the kids (always pack a ball for diversion!) and maybe a visit or two to the nearby pastry shop (pain chocolat became my son’s new favorite). After, we went back to the Seine and walked by Notre Dame, down to the Pont des Arts bridge (and added our lock of course) and then played in the gardens of the Louvre.

I debated a trip into the Louvre but with our short time frame, we decided that we wouldn’t be able to do it justice, and after our short trip to the science museum in London, we figured the kids didn’t yet have the appreciation for what was inside. The other site that we missed was the Sacre Coeur although we were very close to it. Alas, maybe another trip to Paris is in my future …

Overall, it was worth our time and travels to see another country, get a brief taste (that means lots of crepes in my daughter’s world) of Paris and break up our days in London. The Eurostar was very efficient and easy to get to and from. I’d love to take it again to the other countries that it visits.