Who’s rescuing who? Adopting a dog for your family

When a former high school teacher put a comment on Facebook, it broke my heart: “You get what you pay for” after a former classmate asked for recommendations for dogs and breeds. He was implying that a rescue dog was no good and that you had to shell out big bucks for a pure breed to get anything useful.

He doesn’t know Scully. Or Bella, or Spike. Or much at all, in my opinion.

Just about 13 years ago, we stopped on the way home from a camping trip to the Southfield Civic Center, where the Michigan Humane Society was having a pet adoption fair. Scully, or “Faith” as her rescuers called her, was the only puppy left. She was recently rescued from the streets of Detroit and had fleas and worms. A day later, she had a new home, a new name and medicine to solve her medical issues.

She was a perfect dog, a German Shepherd mix, right until she got sick and we had to say goodbye. She never chewed on our things, she walked with us without a leash and was always waiting at the front door if we accidentally left her out. She was our first and oldest child and it was – and is – still hard to let her go. 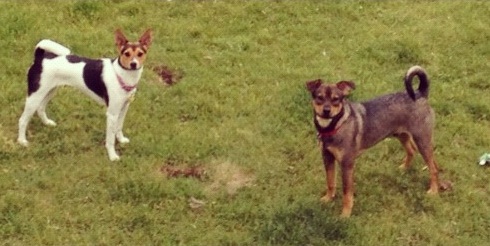 About six months without a dog, the family knew we needed another pet. With two kids each wanting a dog and wanting to sleep with it, I reasoned that replacing a 60-pound dog with two 25-pound dogs would be an even trade.

I didn’t factor in the double poop.

We found Spike and Bella on the PetFinder website and went to visit them at Pet Supplies Plus in Canton. Every other Saturday, the Homeward Bound Rescue League brings in dogs that are up for adoption. We brought them home to foster and get to know them while my husband was still away on a business trip. He had quite the surprise waiting for him when he returned home.

The Mountain Feist puppies are 10 months old now, potty trained, hyper and mischievous and all get –out. They dig holes in the backyard, take off with the kids stuffed 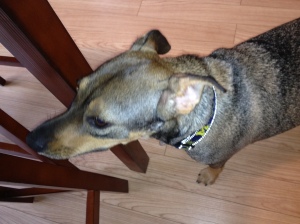 animals and bark in the backyard like their lives depend on it.

And we wouldn’t have it any other way. You see, we have love and we have friendship and we’ll build a strong family bond that makes these newcomers a part of our family for years to come.

You really do get so much more than what you pay for. 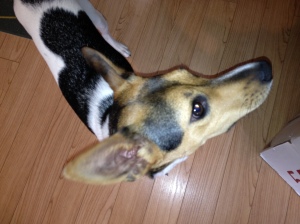